It’s Trials Day at Cheltenham this Saturday and it gives us one last chance to see some Festival hopes in action before the big meeting itself gets under way on March 12th.

Four Grade 2 races and a Grade 3 can be boasted and on a day when racing looks competitive and certain “standout” performers have something to prove, there is definitely great value to be had in the betting ring and at home.

We have a selection in all seven races here as usual, starting with the Triumph Hurdle trial and a pick that sets the tone on the day as we believe we can get a short-priced favourite beaten with an overpriced runner.

It’s easy to see why Adjali is favourite in this race for Nicky Henderson, his powerful trainer carrying all before him this term but his second place in the mud last time seemed to perhaps just expose a slight stamina flaw in him and so despite the slightly better ground, getting home up the hill over 2m1f and giving away weight won’t be easy.

We don’t foresee the same problems with Alan King’s Our Power though who’s improving hand over fist over hurdles and seems to get home no problem.  In receipt of weight he looks the value in this race ahead of the jolly and the overpriced Dogon.

We’ll be watching with great interest what First Drift and Enola Gay can do from near the bottom of the weights in this contest as both seem to have been underestimated, though it’s chancy to back them.

Sticking with a little more class however the top one Spiritofthegames looks the most likely suspect, Dan Skelton’s 7yo having had plenty of time to recover from his disappointing run in a Grade 2 at Newbury in late November though it’s interesting that they thought he had the class for that.

Taking his debut in October as a more reliable form guide, natural progression from then until now would see him go very close off this handicap mark and we rate him our outright selection.

This looks like a very close handicap with at least 5 or 6 of the runners within a couple of pounds of each other on adjusted weights, but at the top sits this Activial who may be able to simply outclass them on the day.

Tom George’s gelding carries 11-12 here and has had a tough enough time, running hard twice to be runner-up either side of his Graduation Chase win but that’s not to say there isn’t still more improvement to come from him which is what we expect.

As long as he gets home around the New Course he should have enough to be involved in the finish, potentially alongside Oldgrangewood and Brelan D’As.

This could yet make a good trial for the Gold Cup itself even though none of this line-up are particularly high up in the current betting for the blue riband event in March.

Minella Rocco still has plenty to give and could be great value for a place today, while it’s hard to split Nicky Henderson’s two runners Valtor and Terrefort but on all known form they should all find it hard to pass Paul Nicholls’ Frodon under Bryony Frost.

Having started his season by winning the Old Roan Chase at Aintree, he was a gallant runner-up to the well-handicapped Baron Alco round here in the BetVictor Gold Cup before improving again to win the Caspian Caviar Gold Cup.

He’s ready for this step up in trip and the best guess is that he’ll take another step forward and take this race in his tride, but may be feeling the effects of it all come the Festival.

It’s totally understandable that the bookmakers run for cover from Nicky Henderson’s horses just as they do from Aidan O’Brien’s on the flat, and while we are by no means saying this Birchdale doesn’t hold a serious chance he is definitely very bad value and can be taken on in the ring.

The one who looks like he’s got most to give is this Jarveys Plate and even in carrying 5lbs more than his main rivals, his Listed win here last time marked him out as one with proper ability and so giving that weight away and still staying on best of all looks like being a real possibility.

At a place like Cheltenham Racecourse, knowing you have an animal that can not only handle the track but who if anything loves it round here can be so advantageous in races and that’s what we can believe we can rely on when it comes to former Coral Cup winner Aux Ptits Soins.

Having rediscovered his best form, nay improving on his best form last time out over course and distance it seems we may about to witness a career best from this lad and with a 6lb pull to be had from the likes of Midnight Shadow and Black Op who are next best on our list, Dan Skelton’s 9yo looks terrific value indeed.

Harry Skelton will indeed be hoping to the flash the steel and scythe down his opposition here, something he’ll probably be favourite to do atop this horse after his handicap win at Doncaster last time out.

There’s definitely more to come from the seven-year-old and he can put the finale to bed at the main expense of Our Merlin and Maquisard with the others potentially some way behind at the weights on current form.

Prominent National Hunt owners Paul and Clare Rooney are set to withhold their horses from future Cheltenham Racecourse events, including the Festival in March, and are encouraging other owners to do the same.

The Rooneys, owners of If The Cap Fits, Go Conquer and The Last Samuri among others, are known to be concerned that jumping’s HQ may be posing a health risk to runners after their Starchitect broke a leg at the December meeting and had to be destroyed. 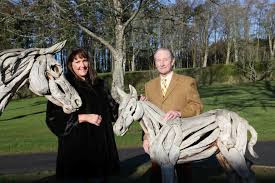 Fellow leading owner Jared Sullivan has made his point publicly that the Rooneys can do as they wish with their string and that people should simply respect their decision and stay out of the debate, which essentially is between them and the owners of the track who incidentally are due to speak directly to the couple soon.

Racing fans on social media are divided over this issue, some claiming like Sullivan that as their horses belong to them and they pay the bills they can do as they wish, some support them outright while others think they are being hasty and have launched vehement defences of Cheltenham and its safety record.

For those who think the couple will be no great miss however think again; the Rooney’s sit second in the British jump owners’ championship behind JP McManus and not having their string attend in March would be a blow to the sport.

The argument began to rage after last year’s Festival during which a total of seven horses died, prompting a review by the governing body and leading to many recommendations coming forward regarding field sizes, veterinary visits and alterations to the conditions of some races.

It seems fair enough that owners who genuinely believe any factor, in this case the layout or running of a particular track, may pose a health risk to their animals have the right to withdraw their horses from future events at such a venue.

We cannot ignore though the points made by some knowledgeable fans that see some hypocrisy in all this.  Musselburgh for example faced a BHA inspection after four deaths occurred in one meeting and it seems the Rooneys are still happy to send horses there.

A point that must be posed, no doubt to the chagrin of many fans, is that National Hunt supporters have often been more vociferous and in the recent political climate also more defensive about their sport than Flat racing fans.

True, horses can break down even galloping but the fact is they mostly die during NH racing because of the fact they jump at pace and so anything that can be done to make this practice safer should be encouraged.

Case in point the Grand National which always had the most notorious fences in all of jumps racing; following similar reviews into horse welfare over the years the big one at Aintree has been made safer (softer in the eyes of some diehards), resulting in not a single death in the National for coming up to seven years.

Has that race been downgraded in the eyes of the public since the safety changes?  Absolutely not and it seems possible we may look back at the Rooneys’ decision in a few years and see them as flag bearers for positive change.